How Mobile Phones And Microfinance Empower Women In The Philippines

How Mobile Phones And Microfinance Empower Women In The Philippines

Sari-sari stores are the smallest retailers in the Philippines, but they’re also among the most important. There are more than a million of these mom-and-pop convenience shops across the country, according to social entrepreneur Mark Ruiz. And it’s their ubiquity that makes them so culturally and economically significant. 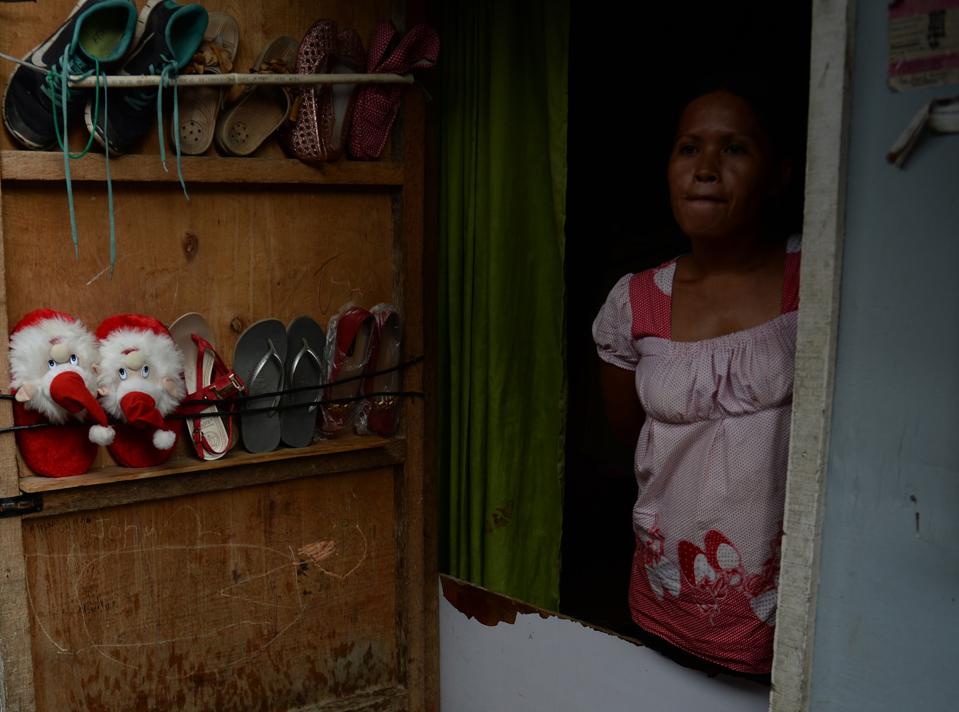 Hapinoy, a social enterprise company, has helped women microentrepreneurs in Leyte province rebuild their communities in the aftermath of super typhoon Yolanda, which devastated the area in 2013. (Photo credit: TED ALJIBE/AFP/Getty Images)

“The sari-sari store is pretty steeped deeply in [the] Filipino culture community,” Ruiz said via email. “It’s an extended pantry where neighbors can come in daily to buy items in small doses, and is also a place of convening where people can bump into each other, where information and chismis (rumors) gets passed along.”

The shops sell staple goods such as noodles, rice, coffee and toiletries in small, affordable quantities, making them vital to low-income and rural communities in particular. Ruiz’s social enterprise company, Hapinoy, aims to empower sari-sari store owners through business training and support. He and now-Sen. Bam Aquino first launched Hapinoy in 2007 with the goal of helping sari-sari store entrepreneurs improve their business outcomes and therefore their economic circumstances (Aquino has since divested from the company).

Most sari-sari owners are women, a demographic closely tied to microfinancing generally. “The global microfinancing movement lends by and large to women. This is so because it’s been proven time and time again that women handle the loans very responsibly, and are very diligent in making productive use of the capital in their microbusinesses to generate added income,” Ruiz said. “Moreover, when a woman head of household earns, its also been seen that it directly benefits the children – whether it be nutrition, education, etc. As such, women can truly catalyze development in the household and in the community.”

“Societies can only progress if economic growth is inclusive, when the fruits of development are also felt by many and not just the few,” he said. “And so it also forms a virtuous cycle — as microentrepreneurs grow their businesses and catalyze local economic development, the larger companies also benefit because they would then have a larger market with a higher purchasing power that they can then serve.”

Hapinoy has worked with more than 5,000 sari-sari stores so far, and has another 1,000 in training. The organization provides education on business best practices and how to level up by introducing new products to their customers. It also helps owners connect with microfinancing lenders when they want to grow their shops.

Financing is a core driver in achieving economic equality for women. The World Bank reports that women own 30-37% of small- and medium-sized enterprises in emerging markets. But many struggle to grow because they don’t have formal bank accounts and cannot secure credit or loans.

“Access to credit can open up economic opportunities for women, and bank accounts can be a gateway to the use of additional financial services,” according to the World Bank. “However, women entrepreneurs and employers face significantly greater challenges than men in gaining access to financial services.”

Through its partnerships with microfinancing organizations, Hapinoy is helping close that gap for women in the Philippines. Hapinoy is also facilitating tech partnerships that benefit the shops’ growth, as well as improved access to financial services in poor and rural communities. These services include mobile bill payment and remittance transfers, which are particularly crucial in areas where many families are supported by overseas Filipino workers (OFWs). Ruiz said accommodating the demand for mobile services is key to the sari-sari stores’ futures.

“We really see the writing on the wall. Sari-sari Stores need to embrace technology, given the modernization of retail as well as the ascent of the digitization of industries,” Ruiz said. “A Hapinoy nanay with a mobile smartphone, a data connection and mobile money form the core pillars upon which the foundation of the future of sari-sari stores will be built. We’re seeing it now in remittances and bills payment, but quite rapidly we will see applications in mobile commerce and mobile trading networks.” (Nanay is Tagalog for mother, and the word is used to refer to sari-sari owners.)

To encourage the use of tech in their businesses, Hapinoy is training microentrepreneurs on using the web, smartphones, and apps to expand their offerings. An example of this is Hapinoy’s work in Leyte, Laguna and Quezon, where it partnered with Qualcomm Wireless Reach to provide phones and internet to sari-sari owners. The microentrepreneurs used the technology to offer remittance services and mobile payments to their customers.

Ruiz said the work Hapinoy has done in Leyte and Samar are among the organization’s most significant accomplishments. He and his team of 30 staff members have helped microentrepreneurs rebuild stores that were lost during super typhoon Yolanda in 2013.

“Our core accomplishments are when we go around and visit our nanay storeowners and we see how the program is truly affecting not just their stores but themselves as individuals, their family, and their communities,” he said.

Casey Hynes writes about the intersection of tech and social progress in Asia.